Part One: Every City that Ever Was 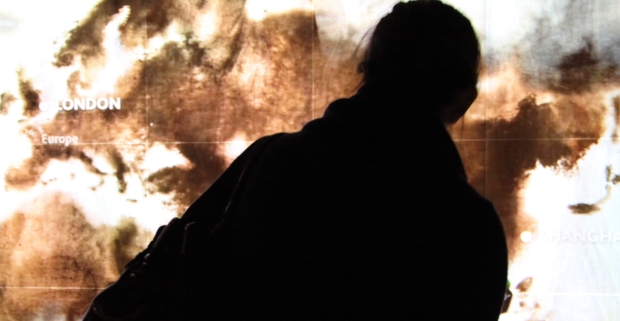 World map in the hull of the Cutty Sark. Damaged by fire in 2007, the last remaining clipper ship re-opened for visitors in Mary 2012.

In January, I left the city for the first time since the week I arrived. When you haven’t seen the countryside for a while, any patch of grass or snowy field, sped by on a train, can remind you of everywhere. Places that I have never been look like places I have not seen for a long time.  I missed parking lots, the horror of great big Wal-Mart parking lots. One of the common criticisms of driving through the Midwestern countryside where I grew up is that it all looks the same, and that it goes on forever – yet there is always there, I’ve found, a reminder through space that the world is very big.

“The city is more beautiful than the country because it is rich in human history,” writes London native Peter Ackryod in chapter 46 of London: The Biography, an 801-page parade of historical fragments that portray London as “every city that ever was and ever will be,” (a quote Ackroyd borrows from Stephen Graham’s London Nights [1925]). Ackroyd claims all sentiments for London – for example, Mary Firth, aka Moll Cutpurse, is not just one of the city’s many celebrated historical criminals, but (like every damn thing) “symbolic of London itself,” her disguised femininity above all “a token of urban identity” (619). London is a “a city perpetually doomed” (p192) by the plague and fires, a place that has “always been characterized by the noise that is an aspect of its noisomeness” (66), and attempts to map it represent “an attempt to understand the chaos and thereby to migrate to it; it is an attempt to know the unknowable.” (104). Ackroyd’s London contains multitudes to the point of parody. To get a sense of the vibe of mythic London, I’d recommend looking through some Hogarth pictures; they’re much more thematically organized, evocative, funnier, and quicker to browse. 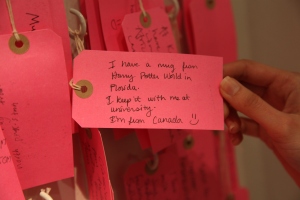 “Please tell us about an object in your home which has come from another country.” Interactive exhibition at the Geffrye Museum of the Home.

In well-known cities, there are always marked contrasts between the vibrancy of culture and the physical realities of people living in close proximity, in buildings that last centuries (or pretend like they can), that will break down, change hands, shift from business to tenement and back again. Ackroyd is right about how the city can feel all-encompassing:  the world seems to have been drawn to this place in its totality, beginning with the Romans who built the first permanent settlement in the first century CE.  International and intercultural coexistence is a conspicuous norm in most neighborhoods – like Golders Green, which I visited last week, and its streets of Orthodox-kosher Korean, Japanese and Chinese restaurants. It’s somewhat unnerving to visit Oxford (an hour away by train) and hear a uniform accent across the people you meet in the streets. Yet it would be a mistake to think that just because people have come together to make something new, in a place with a particular history, that their lives in the city are their only lives. That the things in the city are not contained by it is one of London’s great joys. It is partially for this reason that the posts on my blog tend to be weirdly formal and regrettably infrequent; the everyday stuff of pubs and museums and annoyances and fun has largely migrated to Facebook, where it sits with some 600 friends from around the world, mingling with their domestic lives.

Likewise, the cosmopolitan nature of the city disguises how small it really is; that London seems like it could envelope the whole world is a sentiment better struggled against than accepted. To view London as ‘every city’ is to lose the specificity of what it and every other city can be. It’s the danger when you stay anywhere for too long: you can forget there are other places, and the specifics of your own street mask their similarities to other streets. And then, all windswept vistas look alike. 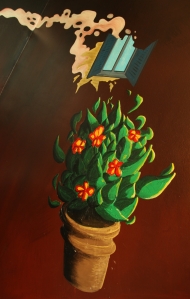 Now in June – on the verge of returning to the American countryside (at least for the summer) for fieldwork –I’m scrambling to become a tourist in what has become my own city. It’s the leaving of London, though, for other cities that prompted this series of posts. Two months ago, I took a three-week trip through Europe with a friend from Iowa. It’s the ‘overseas short-term resident’ trip: go out and see “Europe,” because it’s all ‘right there.’ I left London to begin in Berlin, staying in the same place I did seven years ago: a hostel themed after the Hitchhiker’s Guide to the Galaxy, which provided not only continuity with my previous trip (documented in these three posts), but unexpectedly a bookend for the trip itself with the mural on the wall, depicting a whale being called into being and a pot of flowers falling out a window and thinking to itself, “oh no, not again.” The story concludes on the Greek island of Corfu with hundreds of pots being thrown from windows, but we’ll get there soon enough.

London: The heap, as viewed from Acton Street, Early Spring 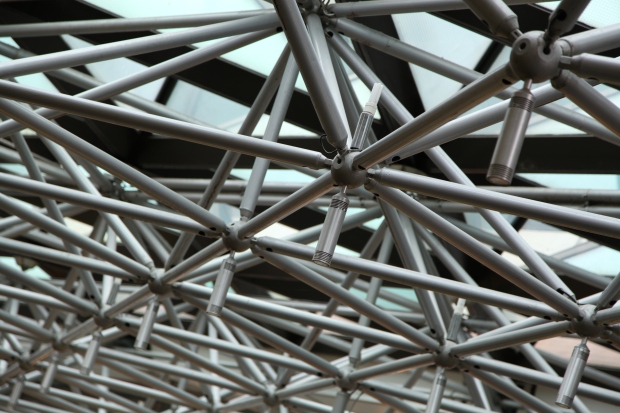 Destroyed in World War II and rebuilt for the Berlin Airlift, Tegel Airport will join Templehof as defunct sometime this month, leaving Berlin-Schönefeld and the newly-built Berlin-Brandenburg as the only ways into the city by air.

Leaving a mild winter in London into March in Berlin was a trip to a different archetypal set of aesthetics of urban life, beginning with the rain.  The image of London fog, drizzle and umbrellas hasn’t held for most of my nine months here; even throughout winter, days remained sunny, in part due to a two-year drought. That month, public service announcements finally responded reminding us to conserve water, just in time for a few rainy days to make them look out of place. Now the bus and train station signs read “Rain or Shine…”  Berlin’s weather was closer to that of a London of legend, overcast greys and drizzle, but the streets themselves are entirely Berlin, reflective dynamics of cool materials that the city makes its own, rising above the layers of history that crack open and are exposed.

London, by contrast, is – in a literal, physical sense – remarkably flat, and the grime of centuries past is (depending on the neighborhood) swept away or built overtop, “that great pile upon which the city rests” (Ackryod: 111).  Neighborhoods become trendy or posh or fall into collapse, gentrify or become derelict, and the city rises, decays and ultimately builds something else on its own ruins. Berlin embraces the myth of the modern; postwar, the Eastern and Western sides of the city worked to reinvent themselves in visions of alternate futures. London’s more visible aesthetic divides appear, often, to have happened practically. The industrial docklands in the East of the city – where the Olympics will happen – were built into the glass-and-skyscraper business district, while around Bloomsbury (where I’ve spent much of my year), the townhouses of eras passed were rebuilt with whatever resources could be found.  Now, these two-to-three story earth-toned mishmashes are being primped and restored in time for the Olympics, sending a message that the place’s styles have always been, will always be, up to date, despite the general transience of London’s population.

Seven years and there’s more continuity than I expected in Berlin, at least between a few days in May in 2005 and 2012. Lounge act Gayle Tufts still has a show going. The punks at the Alex have migrated to the open field where the Palace of the Republic once was, while around the corner from the Topography of Terror – the exposed torture cells from the Nazi secret police, beneath one of the last remaining sections of the Berlin Wall – the Trabi Safari lets you take a drive through the city in East German style. I picked up a few historic sights I hadn’t seen in 2005, but I was more there for the flight, as a launching point, and for nostalgia. When I went to China in 2007, I felt like I was leaving America for a different life, and that the two places marked a divide and I would have to be in either one or the other. With a friend from Iowa (who is living in Italy) in Berlin – a place I had been before with different people – I felt like life was continuous.

Like fields but unlike in inner London, the interiors and exteriors breathe with space. Having coffee in a shop and looking out on the streets near Friedrichstrasse Station and thinking: there are not enough people walking by to achieve the critical mass of the London street, where crossing lights lack authority, and after the first few people step into traffic, the pedestrians claim the intersection. And you cross, with so many people you will never meet again. 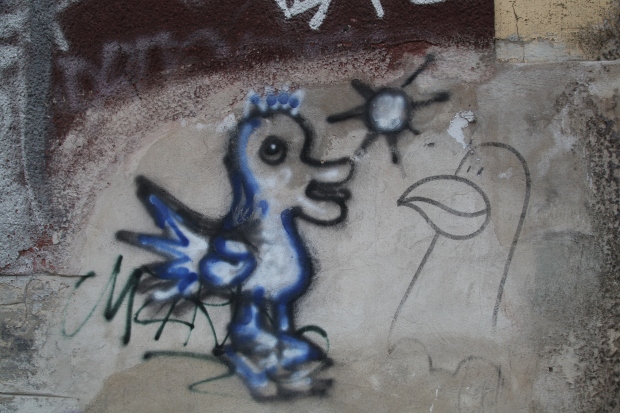 This entry was posted on June 10, 2012, 6:23 pm and is filed under London, Photography, Thinky-thoughts, Travel, Writing. You can follow any responses to this entry through RSS 2.0. You can leave a response, or trackback from your own site.