How long do you have to spend in a place to know it, or (at least) to make some worthwhile pronouncement about it and/or your experience with it? Anthropology says about a year and a half – that’s the standard length of time for doctoral fieldwork. Journalism often gets around the challenges of observation and authority by keeping a great many statements as quotes and attributions. Term papers go by the rule that if someone else said it, it carries weight. Yet limited personal experience with the new, exciting and different is something people is one people often feel compelled to share: IE, travel, something (especially on this blog) I’ve spent a great deal of my time writing about.

A friend of mine, a fellow Midwesterner who visited Europe last year, said that London “feels like it’s the center of something,” a statement with which I concur after having lived there for a year: the city is comfortable with its gravity and has a notable magnetic field. The thing that still strikes me as most endemically (if not uniquely) London as I experienced it is the incredible international diversity of the inner city, the emigrants, expats, natives, tourists, and travelers and the various shades of how one considers him or herself to be any of the above. London is a place that, comfortably embodied as itself, thrives on thoughts of elsewheres. The university scene in London is exemplary of that: I am in a program(me) with very few British students, and even fewer second or third-generation British. At one seminar, I looked across a room of 60 students and counted 40 different countries represented; the remarkable thing here is not the variety, but how commonplace it is. A port town and the former seat of Empire, a place that have always been enmeshed in international exchange, London today feels like a place where the world settles down for a time and then moves on.

“But that’s every city,” said an academic, visiting from Scandinavia, who I met at a conference. “Tell me something unique.”

The author, in front of the Olympics countdown clock at Trafalgar Square. Here’s what the Square looks like in Tweets.

London is, of course, getting ready to show itself to the rest of the world for the Olympics, at a cost currently estimated at £24 billion ($38 billion USD), up from an original bid of £2.4 billion – changes which operate on “selective logics of inclusion” for both internationals and locals (for a study on potential socio-economic and environmental impact, see here). This international welcome further comes as changes in policy are making it more difficult for foreigners like me to stay and work in the country. The current bonus one gets for paying overseas tuition and graduating from a UK university: until your student visa runs out to find a job (for me, January), or go into the general Tier 2 pool, in which case you must not only be the best person for the job but the only person, as employers are legally required to take a minimally qualified EU candidate over candidates from anywhere else. I don’t think this will change the character of England’s capital much, taken as a whole, but it will create frustrations for a lot of folks looking for a good life and a good living.

The Olympics will obviously be a thoroughly massive and momentous event, but it should also be noted that a common local sentiment regarding them is a fear of logistics: its going to be peak hour on the Tube all day, every day, and twice and packed. We who spend a lot of time here (native born, immigrant, expat, etc) love this city and most of us are totally stoked with the rest of the world visiting if you’d kindly form an orderly queue and not do it all the hell at once. Much like the experience of watching the Queen’s Diamond Jubilee flotilla along the riverside, struggling to see over the heads of the rows in front of you, its a thing that will likely be at its most accessible as televised spectacle, perhaps from somewhere else in Europe, funded by a sublet flat. My current plan: work on my thesis from the relative isolation of Iowa, where I am at present.

The Olympics, however – amidst all its televised glory, logistical complications, and legal clampdowns – highlight part of what makes the questions of my first paragraph so pronounced: ours is an age of mutual awareness and casual exposure.

As I mentioned in my previous post, part of the reason why this blog hasn’t been updated in so long is the migration of personal-storytelling-as-mass-broadcast to Facebook, and from the written blog post to the topical photo album. Among the bits of research I’ve become aware of as a student of Digital Anthropology, David Frohlich divides photography into three eras: in the first – roughly until 1920 – photos were used for documentation. Then, with the introduction of the personal camera, there was a shift toward ‘capturing memories,’ the “Kodak moments” of our families’ lives. Now, with the Internet, the photo is used as a means of outright communication as we regularly post pictures to discuss our lives, to tell jokes, to make political statements, to share the significant with the mundane. This shift is part of the social dynamic that underlies this excellent article disparaging a site I still happen to make frequent use of: “How Yahoo Killed Flickr and Lost the Internet.” Simply put, Flickr is for sharing pictures with people you don’t know, and one of the more pervasive myths of the Internet is that everybody knows everybody.

Eric Fischer’s tourist photo map of London, based on data from the Geotaggers World Atlas. Blue dots represent photos taken by locals, red by tourists, and yellow by people who could be either.

Vacation pictures were once stereotyped as dreaded albums and slide trays, ritual abuses inflicted by overactive hosts to their captive dinner guests.  You’ve seen the Eiffel Tower, you’ve seen your neighbor, and while the pictures of them together may hold an important memory and proof of experience for him/her, the interest you have in seeing the two together may vary.  The Internet – however – changed how one shares images, what one shares, and the concept of a ‘vacation’ and how you bring your friends with you – or the world to your friends. Pictures now appear limitless, but their quantity (and the times we take them) spread unevenly in time and space. I think of the preponderance of pictures I take when I’m on the road, along routes with which I have only tenuous, mass-mediated connections. versus the fewer, focused shots of places in which I’ve stayed for extended periods of time. This is vividly illustrated by Eric Fischer – who, using geotagged information – put together these maps  of where temporary versus extended residents have taken pictures. As far as the Internet is concerned, the global image of Prague has barely been photographed by any locals (other cities relevant to this series: Berlin and Budapest). 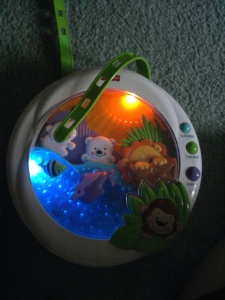 Modern tourism is an act of possession, about seeing things – sometimes wondrous things – and appropriating them as part of our lives, as images and experiences that often converge around recognizable landmarks. In Prague, that is the Old Town Square, the heart of the tourist section, where you do as everyone does: stop and look at the Orloj, the astronomical clock. Built in 1410, it is the oldest timepiece of its kind still working, a rotating and revolving display of hours, minutes, the Zodiac, phases of moon, and the sun, with a procession of medieval vanities and saints rung by Death Itself. As any guidebook will tell you (apocryphally?) the clock was so beautiful that the local leaders blinded its creator lest he surpass it with a subsequent display in some other town. So the clock goes, and – as it has for over four hundred years –the cosmic procession continues, and all the tourists stop and look – as I did seven years ago, and I did this April, as if we can freeze time into something we can take with us. 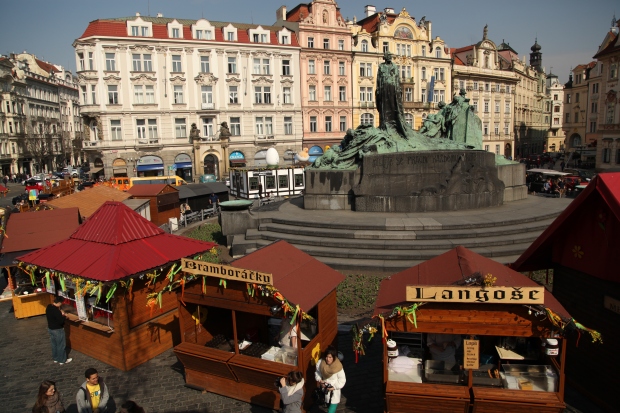 The Old Town Square is a center for memento commerce, a nexus that one wanders into (purposefully and randomly) on the way to see any number of other sites.  On my trip the Easter markets were set up, surrounding the statue of church reformer Jan Hus, who was burned at the stake in 1415 for challenging the Church (many reforms he suggested were later pressed by Martin Luther) and whose death sparked nearly two decades of war.  This is the heart, too, of a visual performance of place, stacked with things seasonal and mundane, hundreds of varieties of hand-painted  hollow eggs and things labeled “Prague,” among which are: wooden dragon puppets, refrigerator magnets, Prague condoms, Prague sex dice, witches, crystal, the same “Born to Be Wild” shirts as were emblazoned with my summer camp’s logo over a decade ago and other quick-press themes (“Good girls go to heaven, bad girls go to “[place]”), plush toys of Zdeněk Miler’s “Mole” character, Mole books. Like the stacks of Royal Wedding kitsch in London that are now being supplanted with soon-to-be-discounted Queen’s Jubilee and London Olympics 2012, these are the marks of a particular image of place, their authenticity drawn from memories and associations of having been procured of a specific location.

The more we walk past that clock, however, the more we ignore it, blend in with it, and ingrain ourselves in a city on its own terms (even if largely as a part of its tourist ecology). Much as in Bourdieu’s idea of the habitus – that the environment contains cues that compel our behavior – we absorb things that surround us, and in growing comfortable with them ignore, turning attention to logistics and life and the background.The notion of difference – and exposure thereto – has been part of what has driven anthropology, too, in tension with the value placed on understanding through length of contact; the tendency to be unaware of so many of the norms of our environments, because of how ingrained they are, to be ‘homeblind.’ Or, to return – a similar sentiment expressed in an oft-quoted line by T.S. Elliot (a Midwesterner who moved to London), that we may “arrive where we started and know the place for the first time.”

For my own region, I remembered the space but forgot about the humidity. You can’t photograph the air, even though it feels like wet fabric in the summer. I flew from London to Minnesota and from there drove. It just gets hotter and more humid the further south you go – through Iowa, to Kansas, to Oklahoma, all the way through a continent of seasonal green parted by the blacktop, spending hours in a moving box of air conditioning. Back in the U.S. (at least for the summer), the visuals seem fixed, and so much right where I left it in Iowa, just a little older, even as the air reminds me less of my own memories than the tropical nightmare of a flooded London in Ballard’s The Drowned World, the city where, in reality, I had left changing sky and unchanging buildings.