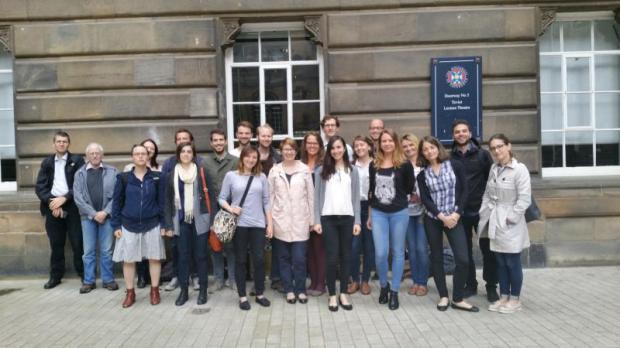 Photo from CRISP’s blog post about the summer school

In June I attend the third annual doctoral summer school from the Centre for Research into Information, Surveillance & Privacy (CRISP) in Edinburgh, Scotland. My PhD program assigned me to share my experiences for others who may wish to join summer school four next year – or five, or 55. As we all know, every byte is forever and will return to haunt us – in its worst possible, out-of-context light – just before we finalize employment contracts, wedding licenses, bids to become head-of-state, etc…

Or not – the longevity of digital information is complicated in practice (as is what we can do to protect it). I attended the CRISP school because (on a related note) I’ve read a fair amount of academic literature about privacy, broadly defined as individuals’ control over their personal space and information. I went to the summer school hoping to gain a perspective on privacy related to surveillance – the acts of observation (via garden-variety voyeurism, CCTV, digital meta-data collection, etc) often thought to endanger privacy.

In regards to that surveillance perspective I hoped to gain, thinking in terms of security helped place me in a more ‘active’ head-space. Privacy is often envisioned as a defensive concern, related to preventing others from gaining access to oneself. Reflecting on the action of surveillance reminded me that many privacy measures are no less proactive. Furthermore, it reminded me that the action of surveillance is situated within its own concerns, which are not directly conceptually opposed to privacy. As CRISP academic and school organizer Charles Raab argued in a paper and summer school seminar, privacy and security (the freedom from danger often invoked for surveillance) are not opposite poles on the same sliding scale. One doesn’t necessarily gain security by giving up privacy, or lose security by enhancing privacy. This fits in with critiques I’ve been developing to present at another summer school in August  on Privacy and Identity Management.

Of course, volumes have been written on these topics – the above is merely my own immediate take-away. Just what ‘surveillance studies’  is was a perfunctory controversy on day one, as we were all jokingly asked if we considered ourselves ‘surveillance scholars’ to an (expected) lukewarm reception. This wasn’t for lack of interest (we all chose to spend the week there, after all) but rather a statement of the complexity of positioning oneself in a multi-disciplinary field. Just what are we as professionals, and how do we study whatever we study?

While this identity anxiety was expected, the week’s conception of multi-disciplinarily was a welcome refresher – as was the flexibility in what surveillance studies can be. I earned my bachelors’ degree at an American liberal arts school, where taking courses on a variety of subjects is the modus operandi, all rooted in humanities-style critical thinking. By contrast, I’ve found that some of the UK’s disciplinary heritages to be more singular – in the case of my own department, reflecting the underlying epistemologies of Computer Science, Human Factors, and Human-Computer Interaction. I felt at home in a place that incorporated technical discussions; a panel of journalists and activists; a film screening (2006’s Galsgow-set Red Road); and two talks that related theology to surveillance. At the CRISP school and July’s Digital Economy Network Summer School, I further noted that the American imports (either academic staff at UK institutions or invited speakers) tended to talk about their teaching as a particularly integral element to their careers (often discussing it in relationship to their own research), which further made me feel a bit ‘at home’ in regard to academic values.

This attention to breadth also speaks to the CRISP week’s overall quality. It was apparent that everyone involved cared about fostering an informative experience for us students, who chose to make the trek from across Europe, North America and Oceania (Asia, Africa, and South America were not represented in students and under-represented in content, in contrast to my current home at the Horizon CDT – where the student body is nearly 50% Chinese if one considers it as part of the same whole as the IDIC program). It was well-scheduled, alternating between seminars and coffee, with a field trip mid-week to Glasgow Community Safety’s CCTV command centre. Even general seminars on topics like ‘publishing in top journals’ and ‘research ethics’ managed to keep a personal and practical voice and focus. Some bits of useful advice I’ll pass on: 1) stop reading when you’re only making marginal gains. 2) Become a part of the review process if you really want to learn the intricacies of how a journal’s conventions. And two talks by journalist Duncan Campbell about mass surveillance (who was prosecuted in 1978 for journalism related to the publicizing the existence of GCHQ – who today, together with various international intelligence organizations, are likely collecting your data as we speak) reminded me of the importance of well-founded paranoia all over again.

Furthermore, I have to hand it to CRISP for its creative branding: part of its promotional propaganda includes ‘CRISP privacy devices’ (‘do not disturb’ hotel-style door-hanger) and packages of CRISP-branded crisps.

Anyway – it was a great summer school, and do consider it if you’re a PhD student considering learning more about surveillance, information and privacy!

This entry was posted on July 28, 2016, 9:24 am and is filed under Uncategorized. You can follow any responses to this entry through RSS 2.0. You can leave a response, or trackback from your own site.